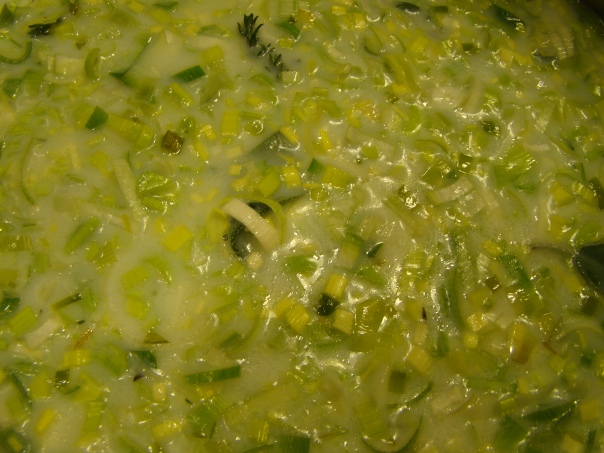 This starts the third month of French Fridays with Dorie. For those who don’t know what that is, it’s an online group that has set out to cook our way through Dorie Greenspan’s relatively new book, Around My French Table.

I’m really enjoying this cookbook and being part of this cooking community. So far, all of the recipes have been ones I wouldn’t have thought to make anyone, or they were versions of things I already make, but exposed me to a different way of doing it. I’ve eaten lots of good food and learned quite a bit along the way, both from Dorie’s book and from my fellow bloggers from FFwD.

As in November, in the holiday-laden month of December, there are five recipes to be cooked, but I can pick the order that works best for me. I had a beautiful bunch of leeks from our Winter CSA share, so I selected the Potato-Leek Soup.

I’ve been making James Beard’s recipe for potato-leek soup from American Cookery for many years. However, I was willing to try to make Dorie’s French version.

The recipe gives options to tweak this soup in many ways. The choices I made were to substitute leeks for the onion because my bunch of leeks was big enough. I also went with the chicken broth and milk instead of water, though I used 1% instead of whole milk. As for the final texture, I love an excuse to use the food mill, so I pureed it for a very smooth soup. 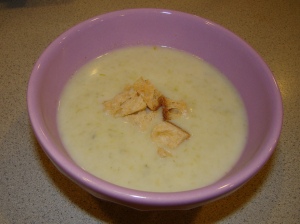 I loved the velvety texture. I think it would work well as an appetizer soup, though it will also be good for lunch. The soup was an easy recipe, and with the different choices you can make, it can be a different soup the next time. My verdict: Très Bien!