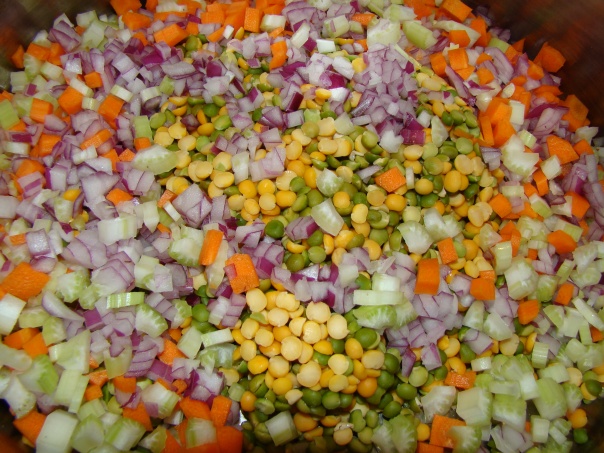 There are tons of places to eat lunch near where I work, but aside from the social aspects of having lunch out (which can’t be beat), to go out for lunch is time-consuming, expensive, fattening, and usually unsatisfying.  I find it’s much better all around to brown bag it.

The catch is that I prefer a hot lunch, except in the summer.  That’s no trouble because I have a wide repertore of tried and true soup recipes along with many new ones on deck to try.

Now that autumn has firmly established itself, hearty soups are at the top of the list.  This past week, I made two pots of soup: one new and one old favorite.

The new one was for a Lentil and Chestnut Soup and came from the Chocolate & Zucchini website.  I’ve never seen the frozen chestnuts it calls for, but every fall (in time for the holidays), you can find shelf-stable boxes of peeled and cooked chestnuts at Trader Joe’s.  I am partial to the French lentils, which this recipe called for. They are great in both soups and salads.  I prefer them to the brown lentils you get at the grocery store. I get the French lentils in the bulk bins at Whole Foods.

Initially, the soup was partially pureed as the recipe suggested, but both Howard and I thought it wasn’t the right texture. Howard ended up pureeing it to make it thicker, which we both preferred. Usually, I prefer to puree soups in the blender for a smoother texture, but the food processor works well here.

The soup was hearty, but had a more delicate flavor than the more hearty lentil soups I make. The chestnuts gave the soup an nutty sweetness, which was nice. We ate this for lunch, but smaller servings would make a nice starter soup before dinner.

Add the lentils, chestnuts, stock, thyme, bay leaves, and some salt and pepper. herbs, a bit of salt and a bit of pepper. Bring to a boil, and let it simmer gently for 20 minutes, until lentils are tender.

Let the soup cook slightly (so you won’t burn yourself). Remove the bay leaves. Puree the soup in a food processor. Reheat, if needed, and serve.

The other soup I made is Split Pea Soup as made by Howard’s grandmother Sadie. It’s so easy. You mix everything together in a pot, no sauteeing required. Bring it to a boil, then reduce to a simmer and let it cook for 2 hours. The peas cook down to mush (sludge, once it’s cooled). Once it’s done, some celery seed and cooked egg noodles add the final touch for a bowl of old-fashioned comfort food.

I also make a variation that’s after the style of my grandmother Teresa’s split pea soup. The base is the same, but the add-ins are barley and fresh chopped dill. It’s an entirely different flavor but equally delicious.

Either way, when I make split pea soup, I use half green split peas and half yellow split peas because I like the color better than either color alone. However, you could use just one color if you prefer.

First, sort through the split peas and remove any rocks or other debris. Rinse the sorted split peas in a colander.

In a large soup pot, combine split peas, onion, carrot, celery, and water or chicken stock. Bring to a boil, then reduce the heat and simmer for 2 hours. Stir it occasionally. The peas will fall apart by the end of the cooking.

When the soup is close to done, boil a pot of water and cook the egg noodles according to package directions.

Stir the celery seed and cooked noodles into the soup. Season with salt and pepper to taste.

When reheating the soup, if it’s too thick, just add some water to dilute as needed.

Variation (Betsy’s Grandmom Teresa’s version): Omit the celery seed and egg noodles. Add a generous amount of fresh chopped dill and 1/2 cup barley to the pot for the last 30 minute of cooking.