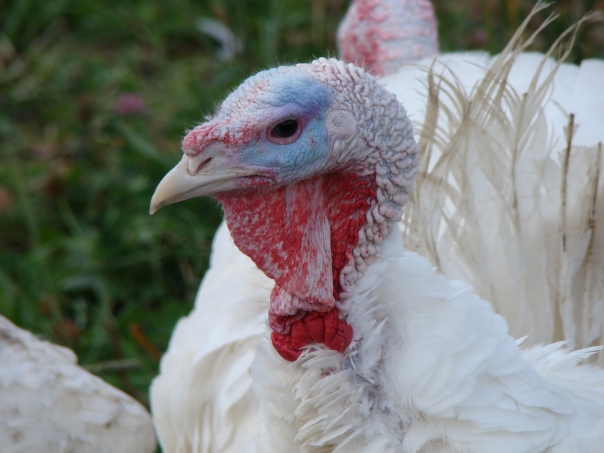 For the past year and a half, we have belonged to the Chestnut Farms Meat CSA. Over the past several years, I’ve been reading quite a bit about meat (including beef, pork, and chicken) that comes out of the large agribusiness corporations. Since I started cooking for myself in college, I’ve never eaten that much meat, but the disturbing pictures exposed in the books caused me to step back and reconsider eating any at all.

I shared some of the books with Howard. We discussed various options. One thing we were sure about was that we didn’t want to become complete vegetarians. One option, of course, is to eat less meat. At home, between the two of us, we only eat three to five pounds a month. We’re on the higher end in the summer because we like to grill when the weather is nice. We eat less meat in the colder months when we make more stews and casseroles, and I will often double the vegetables and beans and halve the meat.

Another option was to seek out local farmers that raise animals in a humane and sustainable way. These animals would be pasture-fed, leading a healthy outdoor life. Pasture-fed meat costs more per pound, but if we’re eating less of it, it’s not extravagant. In the summer, it’s easy to find farmers at the local farmers’ markets, but, year-round, the options are more limited.

Fortunately for us, we were able to join Chestnut Farms Meat CSA. Each month, we go to a parking lot in Arlington Center where we meet Farmer Kim and pick up a cooler filled with 10 pounds of frozen assorted meats, including beef, pork, chicken, and in the fall, lamb. Occasionally, we can also purchase goat or additional cuts, bones and offal for the dog, and, if we get there early enough, there are also farm fresh eggs. For Thanksgiving, there is also an option to order a fresh turkey.

After a few months, we realized, the meat supply was building up in the freezer as we don’t eat 10 pounds a month. This was solved by finding a friend to share our share. We now alternate monthly pickups and it’s working out much better. At this point, at least 90% of the meat we eat at home is from Chestnut Farms.

Sunday, we took a trip to Chestnut Farms for their semi-annual Open Barn Day. The drive to Hardwick, in Central Massachusetts, was lovely. I think we’re past peak foliage, but the colors were still nice. I also spotted a hawk hanging out on top of a dead tree stump, a huge pumpkin patch, and a few glimpses of the Quabbin Reservoir (our water supply).

We parked the car, Kim gave us a map and some directions, and we set out to explore the farm. In the barn, there were sows with recently-born piglets nursing. There were also some young cows and sheep and a giant boar. We patted them all. Farmer Rich let me go into a pen with some baby pigs, but they were afraid of me until I crouched down to their height. There were also some week and a half year old Araucana chicks, the kind that lays blue eggs. I held one of the baby chicks for a while. So cute!

In the pasture, we also saw the pigs and two kinds of goats, earless La Mancha and Boer with floppy ears. The pigs and goats happily ate our spent apple cores. We also visited the turkeys getting ready for Thanksgiving.

They’ve set up an old schoolbus as a chicken coop for laying hens. The door is open so the hens can go in and out during the day. At night, they get locked up, safely away from predators.

We had an enjoyable afternoon visiting Kim, Rich, and Chestnut Farms. It is reassuring to see for ourselves that the animals that eventually become our meat have lived good lives and thrive under Kim and Rich’s stewardship. It confirms for us that the choices we have made about the meat we eat feel right for us. And one thing I forgot to mention, the meat is really delicious!

If you are interested in reading some of the books we’ve read, a bibliography is listed here.

Posted on 19 October 2010, in Meat CSA and tagged sustainable meat. Bookmark the permalink. Leave a comment.