← Our First Lettuce 2010
Chicago: It’s All about the Architecture → 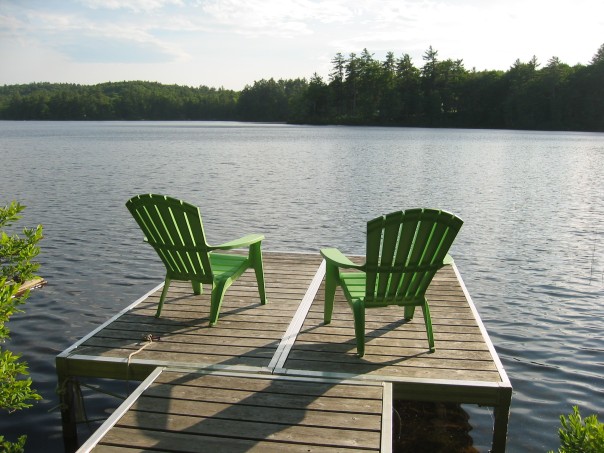 Like many, I think of Memorial Day weekend as the opening book end to summer, even though the Summer Solstice isn’t for another 3 weeks. We had an incredibly relaxing weekend in Maine. The weather was sunny and warm, not too hot. We spent most of our days outside split between doing chores and relaxing.

The weeds had a head-start on us in the month we were absent from Maine. We started every day of the weekend with some garden cleanup. I managed to tame the weeds growing between the pavers on the front walk. There’s plenty more weeding to do, but I made a good dent.

Weeding is hot work. One advantage of the shallow shores of our lake is that, even this early in the summer, the water was heated up enough for us to spend some time in the water. We didn’t put our heads under, but we did wade around. There were quite of few boaters, mostly kayaks and canoes, one kid in a paddleboat, fishing with his very calm dog. We even coaxed Bella into the water briefly. She did a fine dog-paddle for about a minute, then decided it was enough and swam directly to shore, refusing to return to the water.

In Maine, we eat simply but well. In the summer, we usually eat outside on the screened porch. We enjoy the fresh air, and the view of the lake. Because I love to make side-dish salads, we eat lots of those. We had carrot salad, potato salad, and corn salad. One day for lunch, I made an antipasto salad.

We had our first lobsters of the summer. On weekends, there is a guy who comes to a local parking lot with his insulated truck filled with lobsters, steamers and other fish. We’ve been getting our lobsters from him every summer. It is too early for soft-shell, so these lobsters had hard-shells. Howard went for a very large one (2¾ lb). He had to take out a hammer to break open the claws. He even had to hammer open one claw of my smaller 1½ lb lobster.

The local farm stand, Chipman Farm, was open. They only sell what they grow in nearby Poland, so choices were limited. We get a real sense of where things stand in the Maine growing season. In fact, other than plants, all they had on offer were Kirby cucumbers and rhubarb. I bought some cucumbers, which we ate sliced and sprinkled with spiced salt (salt, black pepper, and cayenne). The peel was very bitter, maybe because it’s early, but peeled they were very sweet.

I always bring a pile of books to Maine. This weekend, I finished an enjoyable book: Slow Love by Dominique Browning. I had read an excerpt from the book in the New York Times magazine when we were in New Jersey in April. I have also been following Dominique’s blog: www.slowlifelove.com

This memoir is written by a former magazine editor who found herself adrift when her magazine (House & Garden) closed its doors suddenly (a la Gourmet, another casualty of Conde Nast). Her entire adult life has been defined by her career. In the wake of losing her job, she sets out to figure out what to do with the rest of her life. Without giving away the story of her journey, she finds the secret is to slow down life’s pace in order to find pleasures in life’s little things. I can relate to that. (See the John Ruskin quote at the top of my blog’s sidebar.)

Top 5 highlights of the weekend in Maine (all little things):
1. Abundant lady slippers in bloom
2. Hearing the loon’s crazy call in the night and seeing him swimming on the lake in the day
3. Several swallowtail sightings
4. A turtle sunning on the log next to a our dock
5. A frighteningly giant spider on the dock

Whisk together all the dressing ingredients until well mixed. Toss with carrots and tarragon leaves.

(We also made the Croque Monsieur (with ham) from the same No Take Out menu. We made them as directed, with cheese on the top of the sandwich. We also made them in the Panini press with the cheese on inside only. We preferred Panini-style. On taste, they got mixed reviews. I liked them, but Howard found flavor of the Gruyere cheese too strong. I also spread the cheese on both sides of a hamburger bun when we had burgers for dinner this weekend. I liked that too, sort of a French cheeseburger.)

Posted on 31 May 2010, in General and tagged books, maine, relaxing, salad. Bookmark the permalink. Leave a comment.

← Our First Lettuce 2010
Chicago: It’s All about the Architecture →