Hey Summer, Where Are You?

It’s the first week of June, and it’s raw and rainy.  I’m bundled in fleece because it’s only in the mid-50’s outside. I’m so ready for summer.  I’d even settle for spring.  At boot camp this morning, we were taking a survey of who turned their heat back on…

Local farmers’ markets are just starting to open for the season.  I pick up my first week’s CSA share tomorrow. My vegetable garden is planted but sunshine and heat are needed for it to grow.

When summer tomatoes are at their peak later in the summer, Caprese salad with fresh mozzarella or burrata makes a regular appearance on my table, but it’s much too early for that.  I saw a recipe in the New York Times a few weeks ago for a spring version with fava beans and fennel.  Those aren’t in season yet either, but I felt inspired.

What was fresh at today’s farmers’ market?  Radishes and sugar snap peas cried out to me.  I also have plentiful arugula growing at home, self-sowed from last fall’s plants, and fresh mint in my herb garden. 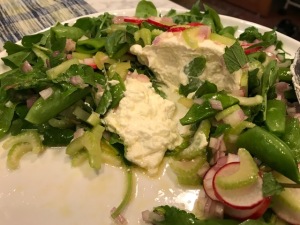 Here’s my version.  The variety of color and textures is a treat for the senses.  I love how I’ll be able to vary the ingredients as the season progresses towards tomatoes and beyond.

In a small bowl, cover diced shallot with lemon juice.  Add a pinch of salt, and let it sit while you prepare the vegetables (5-10 minutes).  Then, whisk in olive oil.

In another bowl, toss the radish slices, sliced celery, and peas together.

Arrange the arugula on a plate.  Place the burrata in the center.  Scatter the mixed vegetables over the arugula and burrata.

Serve immediately.  Use a serving spoon to cut the burrata in half or quarters as the salad is served.

I can’t believe another month for Cottage Cooking Club has come and gone… This is the time of the month to share reviews of recipes I tried from Hugh Fearnley-Whittingstall’s River Cottage Veg in July. As in earlier months, I selected from the choices presented by our group’s leader, Andrea, The Kitchen Lioness, which always reflect ways to enjoy the most seasonal ingredients. The other members of the group (there are about a dozen of us) also choose from Andrea’s lineup and at the end of the month, we compare notes.

I didn’t expect how hot July would turn out to be. In New England, we usually have about two weeks of unbearably hot and humid weather, typically one in July and another in August. Hazy hot and humid summers are the weather pattern that caused me to move away from my hometown in Maryland and never look back, at least not during the summer. It seems that with climate change, my childhood weather is catching up with me. Unlike in Maryland, here outside Boston, in our 150+ year old house, we are not equipped with central air. We suffer through with constantly whirring ceiling fans and floor fans, cold drinks, cubes of watermelon, ice cream, frequent showers, and visits to air-conditioned malls and restaurants. I’ll admit to spending my share of afternoons hanging out the public library too.

Fortunately, I cooked my chosen recipe before July’s heat wave hit. The brilliantly-green Summer Stir-Fry with Fried Rice was beautiful to look at! I picked this recipe because I don’t typically stir fry, and I’m not sure why that is. Our backyard sugar snap peas petered out at the end of June, so I headed to the Wayland Farmers’ Market to stock up on ingredients. At the stand for Two Field Farm in Wayland, MA, my friend Charlie introduced me to golden snow peas. I bought a pint to add to sugar snaps, shelled English peas, arugula and scallions (I omitted the zucchini to accommodate Howard). Stir-fried rice with an egg scrambled into it forms the base for the verdant stir-fried vegetables.

As lovely as this dish was on the plate, we found it “just OK”. Perhaps it needed more spice or we didn’t season it exactly to our taste. In any case, it was a fast weeknight meal, but not necessarily something I will make again.

I’m growing a small backyard vegetable this summer. Usually we grow peas for early summer and then cherry tomatoes and basil, but not much else. With my volunteer work at the local community farm and a new seed library launched this spring, I’ve been more inspired this year. In addition to our usual (albeit minimal) crops, I’ve added scallions, zucchini, and pickling cucumbers. (I also grew some Romaine lettuce, arugula, collards, and radishes, but they have grown, been eaten, and are gone.)

When the first of my cucumbers ripened, I decided to also make the Marinated Cucumber with Mint. No cooking required! Because my cukes were fresh off the vine, I did not peel or seed them. Other than that, I followed the instructions. The result was a light, bright cucumber salad. The fresh mint was a fresh touch. Like the stir-fry, this one was good, but not great.

To date, my experience with Hugh’s recipes had been delightful, so I’ll admit that I was a tad disappointed this month to be underwhelmed by my choices. I will be interested in seeing what other Cottage Cooking Club members thought of their recipe choices (which you can see here). And, I’ll look forward to trying out another round of recipes from the August selections.