← Girls Weekend in Pittsburgh
A Plateful of Happiness Turns One →

At lunchtime today, we had our office Halloween party. We had a pizza lunch, a variety of silly games, and a costume contest. I didn’t wear a costume, but wore my sparkly Happy Halloween t-shirt, Halloween socks, an assortment of Halloween jewelry, and a headband with devil’s horns.

Conveniently, we also had a dessert potluck, so I made Marie-Helene’s Apple Cake. Apple cake doesn’t have any chocolate in it, so Howard wasn’t likely to eat any. Bringing the cake for the potluck meant it would get eaten, and not entirely by me. It was popular and the first plate to become empty. A few people asked for the recipe. 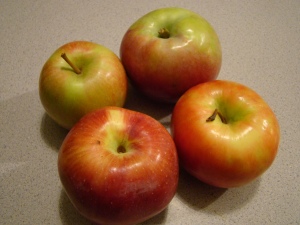 I went to Wilson Farm, a local farm stand, and picked up a variety of local Massachusetts apples. I used four different ones, as Dorie suggested. I chose Honeycrisp, Spencer, Empire, and Macintosh. I wasn’t sure my apples were large enough, but I went with just the four. For future reference, I measured, and I had a generous four cups of apple chunks.

I don’t do a lot of baking without electrical assistance, like my food processor or stand mixer. I was a bit uncertain about how foamy the eggs should be. I decided they looked nice and foamy after one minute of whisking. The color was a nice light yellow too. It darkened up when I added the rum, but lightened again with the flour and butter. The batter looked silky after all the butter was mixed in. The raw batter tasted good too. The rum flavor was very noticeable.

I read other comments from people that used a 9-inch pan. Fortunately, I have an 8-inch springform pan, so I made sure to use it. The batter filled the pan fully, so I felt I used enough apples after all.

The cake was nice and brown after an hour, but still hadn’t pulled away from the sides of the pan, so I gave it five more minutes. It still hadn’t pulled away, but it was definitely done. I thought I was generous with the butter, but I think I should have used even more when I buttered the pan. The top of my cake was a beautiful golden brown, and the cake looked incredibly moist. The sides weren’t browned at all. The cake pictured in the book has equally browned sides.

I used the parchment paper trick again to easily transfer the piping hot pan to the cooling rack. I remember doing that when we made the mustard tart a few weeks ago.

The cake came out of the oven shortly before bedtime, so after I removed the springform pan, I let it cool, uncovered, on the counter overnight.

Unfortuntely, I can’t say I was wild about this cake. A few years ago I made The Apple Lady’s Apple Cake from Patricia Wells’ The Paris Cookbook. It was very eggy, almost more like a clafoutis, and I didn’t like it that much. I compared the recipes, and Dorie’s recipe had more flour, more sugar, more fat (butter instead of oil) and no milk, so it seemed like it would be different. It turned out that the two cakes tasted very similar. Today’s cake looked so pretty, but the cake that held the apples together wasn’t cakey enough for my taste. I’m not sure I’ll make it again.

I want to share something I learned from my friend Karen. I do this most times when I make apple desserts. I make sure to wash the apples before peeling. Then, I put the apple peels and the cores into a small saucepan with some water. For the four apples in this recipe, I added 1 cup of water. I bring the water to a boil, then reduce the heat to a simmer and cook until the apples are mushy. After letting it cool a little, I run the mixture through a food mill, with the blade with medium holes. If you like, you can add a bit of sugar or honey. I get the bonus of a scant cup of applesauce. Even though I compost what doesn’t go through the food mill, I love making the most of the apples with this extra treat.

Posted on 29 October 2010, in French Fridays with Dorie and tagged apples, baking. Bookmark the permalink. 5 Comments.

← Girls Weekend in Pittsburgh
A Plateful of Happiness Turns One →