← A Trio of Winter Winners
A Charmed Life → 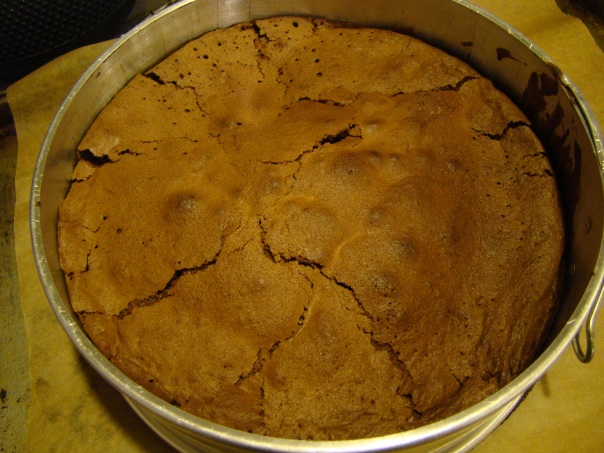 I have another true confession to make this week: I’m not that into chocolate. When it comes to chocolate, I can take it or leave it. I know some people will find that hard to imagine, but that’s the way it is.

I say this because, for French Fridays with Dorie, the recipe this week was a very chocolately cake: Michel Rostang’s Double Chocolate Mousse Cake. What a decadent cake, with a very fancy name, for an ordinary week! Fortunately, I am married to a chocoholic, who comes from a family of chocoholics so I had an enthusiastic audience.

For chocolate, I used a bar of Ghiradelli’s 60% bittersweet, which, chocoholic or not, I always have on hand. This recipe called for coffee, but I’m not really a coffee drinker. I do like espresso drinks, but I get them for a treat from Starbucks, Peets or my favorite Lexington coffee shop. So, as embarrassing as this is, I made some extra-strong instant coffee to add to the mousse mix.

The chocolate mixture came together easily, more easily than I expected. The part I was most unsure about was whipping the egg whites. I wasn’t sure exactly what firm but still glossy meant. I’m not sure I did it right, but whatever I did worked out.

I did made a mistake with the springform pan rim. (By the way, the 8-inch springform pan is definitely getting a workout with the dessert recipes in this book.) I couldn’t decide whether to place it right side up or upside down. Because it was just acting as a rim, I was worried the little edge on the bottom would cause a problem later, so I used the rim upside down. Oops! The top edge, which I placed on the parchment, was slightly rounded. When I baked the bottom crust, a little bit oozed out onto the parchment paper and, eventually, burned. It wasn’t pretty, but it wasn’t the end of the world. I think I should have just used it with its usual orientation.

I didn’t plan the timing quite right. I baked the crust after dinner, but there wasn’t time for it to chill before bedtime, so the crust chilled overnight. Dorie said the mousse could be made a few hours ahead, so I worried it might deflate overnight. It survived. The next night I baked the cake with the mousse layer and we ate it warm for dessert. Then, for night #2, we had the baked and chilled version.

Howard, the chocoholic, preferred the warm version. My opinion might not matter as much, given my indifference to chocolate, but I agree with him. This cake was interesting, but so far this month, I’ve only liked, not loved the recipes. I have high hopes for next week’s Chicken B’stilla.

If you’d like to see how other bloggers fared with the Double Chocolate Mousse Cake, check out their links at French Fridays with Dorie. If you like what you see, you can buy yourself the book and join our cooking group.

← A Trio of Winter Winners
A Charmed Life →